In the 2012 Fed Cup Asia/Oceania Zone Group II, India beats Hong Kong by 2-1 in the Play-off. By this win Indian Women's tennis team is now promoted to the Group I of the Asia/Oceania Zone for the 2013 Fed Cup. Before that India finished Top in the Pool B, where the team beats Philippines, Turkmenistan, Oman and Iran very easily. India has beaten Iran by 3-0, Philippines by 2-1, Turkmenistan by 2-1 and Oman by 2-1 in the Pool matches. 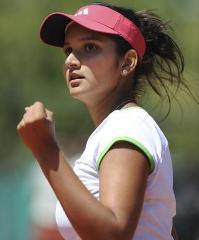 In the Play-off match against Hong Kong played at Shenzhen Luohu Tennis Centre (Shenzhen, China), Rutuja Bhosale of India lost to Chan Wing-Yau Venise in straight sets by 1-6,2-6 of first Round. In the second round, India came back as India's best player Sania Mirza defeated Zhang Ling by 5-7,6-0,6-1. In the final and deciding round Indian pair Isha Lakhani and Sania Mirza defeated the Hong Kong pair Chan Wing-Yau Venise and Zhang Ling.

Here is the final placements of the 2012 Fed Cup, Group II matches of Asia/Oceania Zone -