Sania Mirza was born on the 15th of August, 1986. She is an Indian Professional tennis player. She is the first Indian to break into the top 30 WTA rankings. She is well known for the powerful forehand ground strokes.

Profile and Biography of Sania Mirza 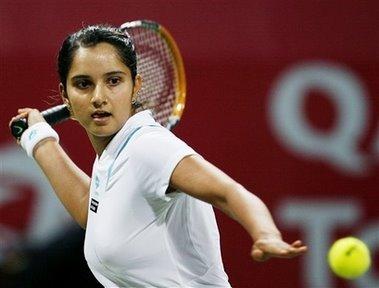 Sania Mirza started playing tennis at a very young age of six. She loved the sport and kept on playing with inspiration from her father who was a sports journalist. She turned professional in the year 2003. She was trained and was handled by her father after that who was mainly Sania Mirza's Coach. She attended the NASR School in Hyderabad and graduated from the St. Mary's College.

The year 2003, in April, Sania made her first debut in the Indian Fed Team Cup, winning all three singles matches. Later she also won the 2003 Wimbledon Championships Girls Doubles title with Alisa Kleybanova of Russia.

Sania Mirza is the highest ranked female tennis player ever from India with a career ranking of 27 in singles and 11 in doubles. She is even the first woman from India to be seeded in a Grand Slam tournament who reached the fourth round of the US Oen in the Year 2005. Winning the mixed doubles Sania Mirza with Mahesh Bhupathi, became the first Indian woman to win a Grand Slam title.

Mirza had the best results of her career during the 2007 hardcourt session where she finished eighth in the 2007 US Oen Series Standings and even won the doubles event with Shahar Pe'er of the Bank of the West Classic.

But after that she was defeated in the first rounds of both the 2008 Wimbledon Championships and the 2008 Beijing Olympics. She made through the first round at the Women's Doubles in Beijing with Sunitha Rao but lost in the second. A few wrist injuries forced her to withdraw for some days.

At 2009 Australian Open she won her first match though lost in the second. But in the mixed Doubles she bagged her first Grand Slam title with Mahesh Bhupathi. She participated in the 2009 AEGON Classic, reached the semifinals and then lost to the eventual winner.

2010 was basically a not so good year for her. She lost a pretty number of matches because of her right wrist injury. She lost in the qualifying rounds of both the Cincinnati Masters and the Rogers Cup. But at the 2010 US Open- Women's Singles Qualifying she won three straight matches. At the 2010 Guangzhou International women's Cup she won the doubles partnering with Edina Gallovitis. She represented India in the 2010 Commonwealth Games and the 2010 asian Games though couldn't get any outstanding results there.

Sania Mirza started her 2011 as world no 141. Competing at the 2011 Australian Open- Woman's singles Qualifying she won three straight matches to qualify for the main draw. After that she participated and competed at a huge number of matches even getting a wild card entry for a few. Yet she was unable to bring out any brilliant performance.

Sania Mirza in the Finals of the Citi Open in USA

Sania Mirza, the top Indian Tennis player is on her way to winning her 12th WTA doubles title, the third in the year. She along with her partner Yaroslava managed to reach the finals until now. If she wins this match she will prove herself once more. To know more about this match check this wiki article.

In 2012 Pattaya Open, Indian tennis star Sania Mirza has won the doubles event of the tournament which was her 13th doubles title. In singles event Daliena Huntochova won. For more information on Pattaya Open, read this article.

Indian Tennis star Sania Mirza and her partener Elena Vesnina has reached to the finals of the women's doubles event of 2012 Dubai Duty Free Tennis Championship. Now they will face the top seeded pair of Lisa and Liezel in the final. For more information read this article.