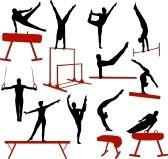 There are 5 events in Acrobatic gymnastics. Details are given below

1)Men's pairs: Which include two men

2)Women's pairs: Which include two females

3)Men's groups: Which include four males

5)Mixed pairs: Mixed pairs include a male base and a female top

Judges and Judging of Acrobatic gymnastics

1) Artistic component: Here the scoring is done by evaluating choreography, diversity and ability to perform against the music given.

2) Execution component: In this component scoring is done on the basis of performance done by partner and Individual talents.