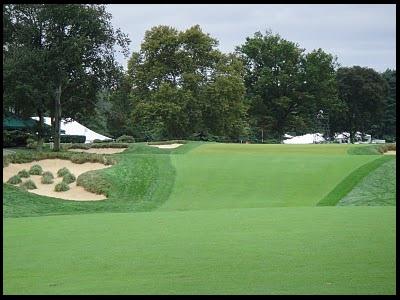 Merion Golf Club is one of the top rated golf club in America. It is located in Ardmore, Pennsylvania at Haverford Township. The golf club is comprised of two courses - East Course and West Course.

Merion Golf Club was established in 1912. But information said there was another golf course which was closed in 1912 after East course of the club was opened. The original course was said to be established in 1896. A scottish architect Hugh Irvine Wilson started the design of the new course in 1910. The West course of the club was opened in 1914 which was also designed by Wilson.

The club has two 18-hole courses - East Course and West Course. The East course of Merion Club is highly regarded course in the world. The 11th hole of this course is witnessed as a great moment in the history of golf sport when Bobby Jones achieved the only 'Grand Slam' at this hole in 1930. Here is the complete information regarding these two courses -
East Course

In 2009, prestigious Walker Cup - a team competition played between Team USA and Team Great Britain & Ireland was hosted by the club. Team USA won the competition by a score of (16.5 - 9.5). The 2013 U.S. Open is also scheduled to be held in Merion Golf Club.