Mikhail Youzhny has won the 2012 PBZ Zagreb Indoors tennis tournsments in singles category. This ATP World Tour 250 series tournament held at Zagreb (Croatia). This russian player also won the doubles event of the tournament with his partener Marcos Baghdatis. This was his 8th title of his tennis career in singles. He defeated Lukas Lacko in the finals in straight sets by 6-2,6-3. Before that he beats Ivo Karlovic in the quarterfinal by 7-6,3-6,7-6 and Michael Berrer in semi-final by 6-3,6-4.Youzhny was seeded third for this tournament. Here is the list of seeded player for the tournament in singles event - 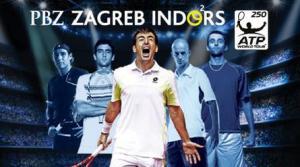 In doubles event four pairs were seeded, they are -
In the finals of doubles event the pair of Makhail Youzhny and Marcos Baghdatis defeated the croatian pair Ivan Dodig and Mate Pavic in straight sets by 6-2,6-2.