Mikhail Joezjny born on June 25, 1982 in Moscow, Russia. 1999 Youzhny was professional in 2000, he reached his first quarterfinal on the ATP tour in Moscow. In his first Grand Slam tournament in 2001 he reached the third round at the Australian Open. Thereafter, the first ATP Tour semi-final followed in Copenhagen at Wimbledon he lost in the fourth round against Patrick Rafter. At the U.S. Open he reached the third round where he defeated by Pete Sampras

2002 Youzhny became his first ATP title in Russia and led the decisive final game against France to win the first Davis Cup . Here he was, after it was 2-2 after 4 games instead of playing out of shape Yevgeni Kafelnikov nominated for the decisive singles match. Although the match took place in France, he was able after a 0-2 sets down the Frenchman Paul-Henri Mathieu yet to defeat in five sets. His teammate Kafelnikov and Marat Safin referred to him as a "new Russian tennis star", and also the former president has traveled Boris Yeltsin congratulated him personally. In 2003 he finished in the top 50and top 20 in 2004.

In 2006 he arrived at the U.S. Open semifinals for the first time in a Grand Slam. In the quarterfinals, he beat the No. 2 in the world, Rafael Nadal in four sets. Youzhny defeated in the semifinals then Andy Roddick in four sets in turn.
Youzhny won the 2007 tournament in Rotterdam. He also reached the finals of the tournaments of Dubai. 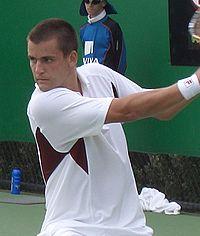 In 2008 he began the season with the fourth ATP tournament victory of his career after the final in Chennai, 6-0, 6-1 win against Rafael Nadal could. In the subsequent Australian Open he first came into the quarter finals where he lost the subsequent surprise finalist Jo-Wilfried Tsonga. Youzhny reached in the next week with No. 8 in the world rankings, the best finish of his career so far.
In February 2010 he met in Rotterdam to the finals before, but there he had the second Set against the Swede Robin Soderling to give up, because of physical problems. But right at the next tournament in Dubai, he came back before the finals, but lost after a hard struggle against the Serb Novak Djokovic in three sets 5:7, 7:5 and 3:6 & he won the BMW Open 2010.

Profile and Biodata of Mikhail Joezjny