The fight free style is practiced by athletes, both male and female. The fighting, lasting 3 rounds of 2 minutes each, held on a rug (called a mat) bordered by a red circle (that area) which restricts the area where the fighting takes place.

The goal of combat is "pinned" the opponent, throw him with large amplitude, or win two of three shots. The back is equivalent to the KO , and the contestants try to get you to perform various moves (eg projections, knockdowns, imbalance, controls) which are awarded scores ranging from 1 to 5 according to difficulty. In the absence of the back, the victory is awarded points. 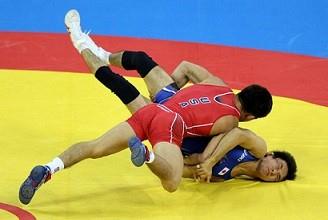 When the points difference is equal to or greater than 6, it automatically wins the round. In the case of a tie with the two contenders who have won at least one point each, the winner is one who has won the last point. In the event that the recovery time to 0 0 the arbitrators award the victory to the fighter who they believe has done more "action", or, more tried to attack the opponent.
Combat is controlled by a referee of carpet, and two judges who are on the edge of the mat. During the fight two opponents can use a wide range of throwing techniques and throwing using all parts of the body (from the waist of the techniques are very similar to those used in greek roman, plus there are many techniques that involve the taking or the use of the legs). Once the adversary has been brought to the ground you can use many techniques that are used to bring (if it already is) the opponent with his back to the ground and in this way to end the match.

To increase the physical qualities of the wrestler is taken care of athletic training in a particular way: gymnastics, weight training (weight lifting and powerlifting in particular) for the strength and power, shot uphill to the explosive power, race and specific circuits for resistance.
The characteristics of wrestling (in feet in full contact fighting, physical conditioning and control of the opponent) make the discipline useful to defense.

Illegal techniques
* To break against subsection (English: joint locks )
* Stranglehold.
* Grab his head with both hands.
* To encounter an opponent who is in brostilling the mat.
* It is forbidden to push a brostilling in the head direction.
* To grab an opponent below the hips, or squeeze him with his legs.
* Using your legs active (buckle legs, kick or lock).
* To break the forearms more than 90 degrees.