Achanta Sharath Kamal is one of the top Table Tennis player of India who has win number of International Table Tennis Tournaments and done exceptionally well at world stage.

Biography and Career of Sharath Kamal

Achanta Sharath Kamal was born on 12th July, 1982 in Tamil Nadu state of India. He started playing Table Tennis from very less age. By winning National Championship of the game in 2003, Sharath shows a huge amount of talent in him to India. 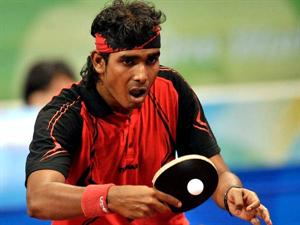 In 16th Commonwealth Table Tennis Championship, 2004 he won the Gold in men's singles category. And this was the first time an Indian Table Tennis player has done it. In the same tournament under his captaincy India won the Gold in Men's Team Category. He continues his brilliant performance in 2006 Commonwealth Games where he got indiavidual and Men's Team Gold Medal.

These performances has made him the top table tennis player of India. In 2007, he become the first Indian to win The Pyongyong Invitational Tournament held in North Korea. He has reached his highest ranking of 39 at the start of this year (2011).