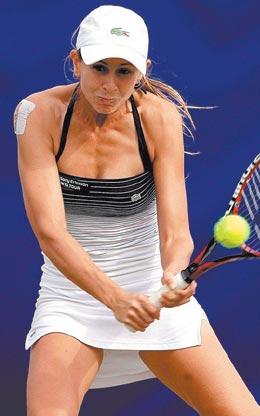 Gisela Dulko is a female tennis player from Argentina who is known for his excellent doubles game and as well as a good singles player. She become world no. 1 women's doubles player in 2010 and remained at the position for 24 weeks before overtaken by Flavia Penetta in 2011 who was also her partner. She has also won one Grand Slam tournament in doubles category of women's tennis.

Dulko started his tennis career at Junior level. She won four Junior level Grand Slam tournaments in doubles events. In 2001 she become professional player. She won her first WTA doubles title in 2003 at Grand Prix SAR La Princesse Lalla Meryem held at Morocco. Her partener was Maria Emilia Salerni. In 2005, she won three doubles titles. Generali Ladies Linz was the most important among the three. She won two more doubles titles in 2006.
2007-08: Focus on Singles
In 2007 at Budapest Grand Prix tournament she won her first WTA singles title beating Sorana Cirstea of Romania by 6-7,6-2,6-2 in the final. In the same year she won her second WTA singles title at Forest Hills Tennis Classic. This time beating French player Virginie Razzano in the final with a score of 6-2,6-2. She started to focus more on singles rather than doubles during this period. In 2008 she won her third singles title.
2009-Present: Success in Doubles
Dulko again started to play more in doubles in 2009 partenering Flavia Penetta. She won two doubles titles that year, one at Swedish Open. Year 2010 was best for her as she not only won eight WTA doubles titles but also ranked No. 1 in Women's doubles ranking for the first time. Among the eight titles she won that year, the year end WTA Tour Championships held at Doha was the biggest win of her career till that date. She won another big tournament in doubles at 2011 Australian Open where she again partnered Flavia Penetta. They both defeated the pair of Victoria Azarenka and Maria Kirilenko in the final by 2-6,7-5,6-1. In 2011, Dulko also won her fourth singles title at Abierto Mexicano Telcel, Mexico.