Subhash Gupte was a former Indian Test cricketer who was known for his excellent spin bowling skills. He was the front-line spinner of India in 1950s and early 60s. A little incident ended his career when he was only 32 and India lost a great spinner. He was born in Bombay (Mumbai) on 11 December, 1929. 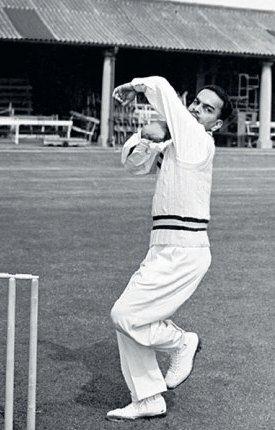 Subhash Gupte started his first-class cricket career by playing for MP Engineer's XI against MK Mantri's XI in a three day match in 1947. He took two wickets in that match. His next match came in 1948-49 Ranji Trophy match for Bombay against Madras but failed to impress with his bowling. In Ranji Trophy 1950-51, he took 6/55 against Maharashtra in their first innings and 3/93 in the second innings. He become the part of the Bombay Team for next two seasons.
Test Debut and West Indies tour of 1952-53
In 1952, Subhash Gupte played his first Test against England in third test at Eden Gardens, Calcutta. He remained wicket-less in that match. He got another chance in Tests against Pakistan at the end of the year and played in third and fourth test. He took five wickets in the third test. He also started to playing for Bengal in 1953.
In 1953, when India toured West Indies, he played in all five Tests. In the first Test, he took seven wickets for 162 runs in West Indies first innings on a batting wicket. In second test he took 5 wickets in the defeat. He had his second five-wicket haul in the third test with a bowling figure of 5/107 in first innings of West Indies. In fifth and last match he took another five-wicket haul with a bowling figure of 5/180. He took a total of 27 wickets in five tests in that Test series.
In 1954-55 tour of Pakistan he took 21 wickets in five tests with a bowling average of 22.66. He took three five-wickets hauls also. In first Test, he had a bowling figure of 5/18 in Pakistan's second innings. He continued with his form against New Zealand in 1955-56, when he took 34 wickets. In 1958-59 in a match against West Indies he merely missed to take all the ten wickets in an inning. His figures in that match were 9/102. It remained best bowling figure by an Indian in Test for long period until Kapil Dev broke that record with his figure of 9/83.

Records and Statistics of Subhash Gupte in Test Cricket