Ashok Menaria is an upcoming cricket talent from Rajasthan. This 21 years old cricketer was born in Udaipur, Rajasthan on 29 October, 1990. An all-round cricketer Menaria is currently the part of Rajasthan Royals Team in Indian Premiere League (IPL). In Indian domestic cricket he plays for Rajasthan. 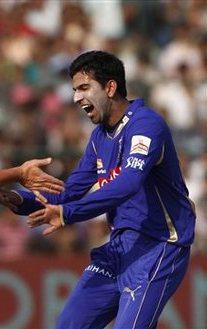 Menaria started playing cricket for Rajasthan in Under-15s and Under-17s. He also captained the India's Under-19 Team in 2010 Under-19 Cricket World Cup. But before that he made his first-class debut for Rajasthan in a match against Mumbai in 2008-09 season. In Mumbai's first innings he delivered with bowl and took three wickets by just conceding 7 runs. But he failed with his batting scoring 8 and 5 in huge defeat of 237 runs in that match. During Rajasthan's winning campaign in Ranji Trophy 2011-12, he played five matches and scored 462 runs with an outstanding batting average of 77.00 with a top score of 230. In 2012, he becomes the part of the Rajasthan Royals Team owned by Bollywood star Shilpa Shetty.
IPL 2012
In his first IPL campaign, Menaria is the part of Rajasthan Royals Team. In a match against Kolkata Knight Riders, Menaria plays an important role in the win by scoring 40 runs off 30 balls including 4 fours and one monstrous six.

Ashok Menaria is one of the most talented cricketers from Rajasthan state. He is an aggressive left-hand batsman even in long format of the game. His batting strike rate of 63.09 in first-class matches proves this and he has already plundered 22 sixes in only 14 Matches. Apart from his batting, he is also a good leg-break bowler. He is a player of great potential and we will definitely see him in Indian Squad one day.