With their wins against finalists of World Cup 2011, Bangladesh has now reached to the finals of Asia Cup 2012. This is the first time when Bangladesh has reached the finals of any ODI tournament consisting of big teams. But it is not the first time they are in the final of a tournament. In 2009, they reached to the final of the tri-nation series (other two teams were Sri Lanka and Zimbabwe) held at home. 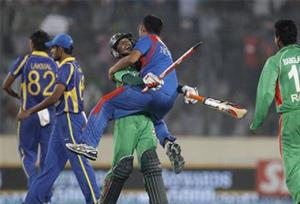 In final Bangladesh will face Pakistan who tops the chart in league matches of the tournament with nine points. India and Bangladesh both have eight points. India have better Net Run Rate but due to the defeat in the only league between these two teams, India has to go back to their home with disappointment. This is the second consecutive time, India has not made into the final of an ODI tournament. Bangladesh has really played some very good cricket in this tournament and they even look like a big challenge for Pakistan who has more time to prepare for the final after being defeated by India in their last league match even scoring 329 runs. Pakistan looks a better team, but the kind of confidence the Bangladesh has now after defeating two big cricketing neighbours they will put their best in the final on Friday.

Excellent performance in the league matches

Bangladesh has shown some really great performances in the league matches. In the first match against Pakistan, they were looking good but couldn't win the match. In their second match against India, the Bangladeshi batsman shocked the World Champions with some lusty hiiting and aggressive approach in chasing a good total of 290. In the third and last match against, they need nothing less than a win in order to make to the finals. First their bowler specially Nazmul Hossain destroyed the Sri Lankan batting. And then chases the target of 212 runs (in 40 overs) with five wickets remaining. Tamim Iqbal and Shakib were the hero this time in the batting.

Pakistan has defeated Bangladesh in the opening match of the Asia Cup 2012. Mohammad Hafeez and Umar Gul made an all-round effort in this Pakistan's win. Bangladesh also did well in this tight match. Here is the detailed report about this match.