Aged 19, Didier Drogba joined with Le Mans. With the confidence of his coach Marc Westerloppe, he signed his first professional contract, at 21. Two years later, with a promising record 12 goals in 64 games, he joined Ligue 1 the En Avant Guingamp in January 2002, the coach is Guy Lacombe. It then helps the club to remain in the elite, and proves the general public the following season ( 2002 - 2003 ), scoring 17 goals. Partner then Florent Malouda, it allows Guingamp finish three points of the Champions League.

In 2003 Didier Drogba moved to Olympique Marseille. After his strongest season (2003/04), when he and 18 hits third in the scoring charts in France and has scored 11 goals in European competitions, he finished second in the vote for African Footballer of the Year. After that season he was definitely interesting for the top clubs in Europe. There have been concrete offers from Chelsea and Juventus Turin. 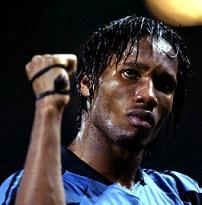 Although he initially wanted to stay with his favorite club in Marseille, but then he moved to Chelsea, where he now wears the back number 11. Under Jose Mourinho, the former coach of the London club, he won the English championship in 2005 and 2006. In the 2006/07 season he won the League Cup with Chelsea and the FA Cup. In both finals, he scored the decisive goals for Chelsea.

In 2008 he reached the final with Chelsea the Champions League, where Chelsea to Manchester United hit and lost on penalties. As Drogba in the 116th Minute due to an assault by the Red Card had received, he could no longer be in a penalty shoot-used. In the final of the FA Cup in 2009, he scored the equalizer before Frank Lampard the winning goal. In the 2009/10 season, Chelsea secured on the final day with a 8-0 victory over Wigan Athletic the championship. Drogba headed in the match with three goals and was therefore unable to set up a total of 29 goals with the sole goal scorer crown. Just a few days later Drogba's free-kick scored the only goal in a 1-0 victory at Chelsea in the FA Cup final against Portsmouth and ensured the Londoners, thus winning the Cup. On 28 August 2011 was Drogba after a clash with Norwich City goalkeeper John Ruddy admitted to the hospital.Three weeks after his concussion, he was against Swansea City comeback and scored in injury time his first goal of the season.

On 8 September 2002 Didier Drogba made during the African Nations Cup qualifier against South Africa 's first international match. In his second international match on 11 February 2003 he scored 3-0 against Cameroon, his first international goal. The Ivory Coast but missed qualifying for the African Cup of Nations in 2004 and so became the first African Cup of Nations in 2006 his first tournament with the national team. In the final against Egypt, the Ivory Coast lost on penalties. With three goals belonged to Drogba the top scorer of the tournament.

Drogba qualified with the Ivorian national team for World Cup 2006 , scoring in the first game against the Argentine national football team with the goal back to 1:2 for the first World Cup goal of the Ivory Coast. At the second preliminary round of the 2006 World Cup against theNetherlands , he received his second yellow card and therefore had the last group match against Serbia-Montenegro , the Ivory Coast won 3-2 watch.

2008 there was only enough space to 4 at the African Cup, although the Ivory Coast with 16 goals - three by Drogba -. scored the most goals in the tournament in 2010 was already at the quarter final conclusion, with the Ivory Coast in the 89th Minute against Algeria with a 2-1 lead went, but already in the 90th compensation fell. In the second Minute of extra time could go with Algeria 3-2 lead and defend this lead until the end.

Also for the Football World Cup 2010 in South Africa, the Ivory Coast had qualified. Drogba moved during the preparation of a broken right elbow, but could play with a special sleeve at the World Cup. After a 0-0 draw against Portugal, a 1:3 against Brazil, with the goal Drogba scored for 1:3 final score, and a 3-0 victory against North Korea different from the Ivory Coast as a group of third parties.

He is captain of the Ivorian national team and currently with 52 goals in 80 games scoring record. His 50th Goal he scored on 10 August 2011 at the 4-3 win against Israel.