Studied at the University of Arizona State, he knows a very successful amateur career, winning three championships NCAA , the only other player to have achieved such a feat since Ben Crenshaw. He is also the second golfer, after Jack Nicklaus to win the title and the NCAA Championship U.S. Amateur the same year. Since then, only Tiger Woods has managed to achieve this double.Nicknamed "Lefty", he was the first southpaw to win this tournament. However, it is not a real left: this is due to his apprenticeship with his father, learning in which he practiced exercises in front of him. Then in 1991 he won his first Tour title PGA although it is still amateur. He won the Northern Telecom Open at the expense of Tom Purtzer.

In 2005, a second major, the last of the season: the PGA Championship in Springfield (New Jersey). He also won the next major, also his second Masters victory in April 2006. Thus he again reached number two in the world, behind Tiger Woods. In the next major, the U.S. Open Championship, Mickelson had an opportunity to shoot his third consecutive major, when he, as leader on the last hole with a double bogey and the victory forfeited to a second place fell. He was also a member of the U.S. Ryder Cup team in 1995, 1997, 1999, 2002, 2004, 2006 and 2008. 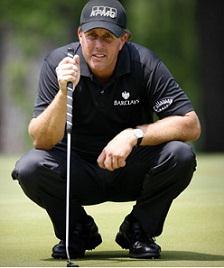 Mickelson is married with three children. If his wife in 2009, breast cancer is detected, he pulls himself back indefinitely. After another second place in the U.S. Open, Mickelson pulled after six weeks absence not its old level. Only in the last game of the season, "The Tour Championship" on September 27, 2009 he picked up another big title. In November he won the WGC-HSBC Champions in Shanghai. On 11 April 2010, Phil Mickelson won his fourth major title, winning for the third time in his career the green jacket awarded to the winner of the Masters in Augusta.