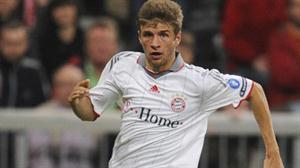 His International career begins in 2004 where he was selected for under 16 Germany team and in 2009 he was a member of under 21 squad. Muller is currently looking and focusing on Euro 2012 and Germany was qualified for 2012 Euro. Muller scored 7 goals in Euro qualifiers. Thomas Muller was married to Lisa in December 2009. More details about the profile and awards won by Thomas Muller are given below.