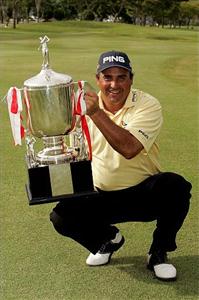 His best ranking is 9th in Official World Golf Rankings in the year 2005. 2010 was not a good year for Cabrera as he was suffered from injuries and missed many major tournaments in the year. Apart from major wins, Cabrera also won Brazil open in 1998 and 1999, PGA grand slam of Golf in 2007, Paraguay open 1995 etc. More details about the profile and career wins of Angel Cabrera are given below.

Angel Cabrera nick name: El Pato in Spanish and The duck in English