Nadia Petrova is a female russian tennis player who has a very decent Tennis record. She was born in Moscow on June 8, 1982. Petrova started playing tennis at Junior Level, where she won the French Open in 1998. She become professional in 1999. Her good performance in the year leads to the Top 100 of Women's singles ranking. In her first Australian Open in 2000, she reached to the Third Round. This performance leds to her singles ranking in the Top 50. 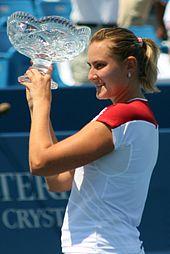 Nadia's career started to fly in 2003, when she reached to the Semi-final of the 2003 French Open after defeating players like Monica Seles and Jennifer Capriati. Her ranking rose to Top 30, the first time which later rose to Top 20 at the end of the year.

In 2005, she won her first career title at Generali Ladies Linz by beating Patty Schnyder in the final. She once again reached the Semi-final of the French Open. Year 2006 is the best of her career as she won at Qatar Total Open, Family Circle Cup and Bausch & Lomb Championship. After winning Qatar Telecom German Open, she achieved her career best singles ranking of No. 3. She won many WTA titles and remains among the Top players till date.
Doubles
Petrova also played in many doubles event of the game and won many title, more than she won in singles. Similar to the singles, her career best ranking in doubles is No. 3. Her best achievement in doubles is WTA Doubles Championship 2004, defeating the pair of Cara Black and Rennae Stubbs. Her best performance in Grand Slam Events is at 2010 US Open, where she reached to the Fianls of the doubles event.

Records and Statistics of Nadia Petrova