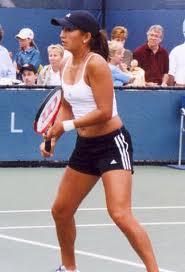 Jennifer Hopkins is an American professional female Tennis player born at Leawood, Kanas in USA on September 2, 1981. A Right Handed tennis player who started her professional tennis career in 1999. She has not won any WTA title in her career but her record in ITF (International Tennis Federation) is really good where she has won 7 Singles and 5 Doubles titles.

In Grand Slam Tournaments, she has never goes beyond the Second Round. She reached the Second Round in each of the Australian Open, US Open and Wimbledon Tournament, except French Open. She once become World's No.55 in Women's WTA Singles Ranking. Jennifer Hopkins retired from the Professional Tennis in 2005.

Personal Life
Jennifer Hopkins got married in 2006 with Taylor Dent. She also have a baby whose name is James Phillip Dent.

Records and Statistics of Jennifer Hopkins