Wembley Arena is decided to be the venue for Badminton and Rhythmic Gymnastics for 2012 London Olympics. Wembley Arena is located in north-west London, around six miles from the city centre. The stadium is suit for 6000 spectators to watch the live badminton and Rhythmic Gymnastics event for 2012 London Olympics. After the Olympic Games the venue will host more sports activities and music events. There will be 7 events conducted in Wembley Arena for 2012 London Olympics. The starting date of the games in wimbley stadium is from 28th July to 12th August 2012. The stadium was old and opened in 1934 and renovated in 2005. More details about the event conducted in the venue, location of the venue, capacity etc is given below. Reaching Wimbley stadium is easy as all means of transport is available. You can also get the information for reaching the wimbley stadium which is given below. 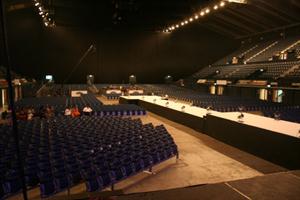 How to reach Wembley Arena?

Badminton and Rhythmic Gymnastics are the two games which will be played in Wembley Arena. The games will start from 28th July to 12th August 2012. Reaching Wembley arena is not a tough task. You can use national railway service or bus routes to reach the Wembley arena. The only draw back is that you cannot use car to reach wimbley arena as there is no parking facilty available during the Olympic games. If you are staying near to the Wembley Arena, You can use cycle or walk to the arena. You can use cycles which is easy to park and ride through the way to reach the stadium.

You can easily reach Wembley Arena through rail, bus, taxis and private vehicles. Take the trains from Marylebone station in central London, the Chilterns and Birmingham, and Wembley Central station to reach Wembley Stadium station. You can also use underground stations which includes Jubilee and Metropolitan lines, and Wembley Central, on the Bakerloo line. Bus is also available at almost all stops and places in London.