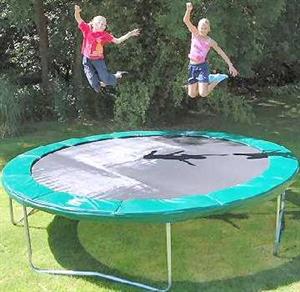 Are you seen the acrobatics? This is performed by the athlete (gymnasts). A "Trampolie" is a springy bed-shaped device, on which person can perform acrobatics. In 1934, this Trampoline was first built by two students from Lowa University, USA.

"George Nissen" and "Larry Griswold" got the idea after watching trapeze artistes in a circus bouncing around on the safely net. They built first trampoline by stretching a piece of canvas over an angled iro frame and then securing it with coiled springs.
After words, they set up a company in 1942 to manufacture "trampolines". They became a popular recreational activity. Some used trampolines fir exercise. NASA used them to get astronauts used to zero gravity on the first space flights!
In 1964, the first World Championship of Trampoline was held. From 2000 Olympic Games, Trampoline became a medal event.

-Trampolin is the Spanish word; meaning of the Trmpolin is "springboard"
-Modern trampolines have fiberglass rods instead of springs for better bounce and safety.

-Competition trampolines measure 4.2m x 2.1 m and have a central marker
-Ten different skills must demonstrated and judges mark the routine out of 10
-Marks are given for completeness of moves, staying near the centre, from and degree of difficulty
-Any routine must always start and finish on the feet

Jason Burnett from Canada performed a trampoline routine at the Davos Trampoline World Cup in 2010 with a degree of difficulty of 18.8, a world record.