Ravichandran Ashwin is the latest spinner in Indian team. Ravichandran Ashwin was born in the year 1986 September 17. Ashwin was born at Madras, Tamil Nadu, India. His carrom ball is very famous. He is the second bowler after Mendis to bowl a carrom ball. His nick name is Dada. Ashwin is a right handed bowler and a right handed batsman. He has not yet played a test match for India. His one day debut was against Sri Lanka on 5th June 2010. 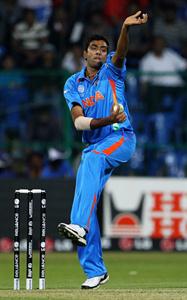 Ashwin is also the current player of Chennai Super kings in Indian Premium league. Ashwin has got most wickets in 2010 Champions League Twenty20 for Chennai Super Kings. Ashwin completed his Engineering in IT from SSN College of engineering, Chennai. Ashwin also played for Tamil nadu in first class cricket. More details about the profile and career performance of Ravichandran Ashwin are given below.