Mardy Fish born on December 9 1981 in Edina, MinnesotaIn. 2000 Mardy Fish began his career in at the age of 18. In his first professional years, he played mostly smaller tournaments, before 2002, together with Andy Roddick in a double in Houston was successful. In 2003 he won his first singles tournament and finished the year as the Twentieth tennis world rankings. He won the final of the Stockholm Open against the Swede Robin Soderling.
In 2004 he reached the finals of the SAP Open in San Jose and the Gerry Weber Open in Halle. In August the same year he won the U.S. the silver medal at the Olympic Games in Athens , when he was in the final against Chile's Nicolas Massu defeated. Other successes were in the 2004 season and also during the following year.In 2006, Fish and celebrate his second tournament victory when he, the Tournament of Houston with a win over Jurgen Melzer to win. He also reached the quarter-finals of Newport, Washington and Metz.

At the beginning of 2007, Fish took care with the quarter-finals at the Australian Open for attention. Other achievements include the semifinals of Auckland and Memphis, as well as the quarter-finals of San Jose. After a six-month dry spell without success in August 2007 he reached the finals of New Haven, which he, however, with 5:7 4:6 against James Blake lost.
On 22 March 2008, he won in the semifinals of Indian Wells Masters against Roger Federer with 6:2 and 6:3. In the finals he lost to Novak Djokovic. 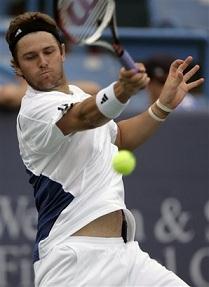 In a Davis Cup match in July against Marin Cilic of Croatia, he pulled a muscle injury to the abdomen, his participation at the LA Tennis Open in Los Angeles prevented. On his return to the Tour at the Legg Mason Tennis Classic , he defeated in the first round of the German Philipp Petzschner . Also, the U.S. Open , where he was placed at position 25, he had to cancel due to injury. He was by the Austrians Daniel Köllerer replaced.

The 2010 season began with a double victory for Fish at the tournament in San Jose alongside his compatriot Sam Querrey , where the German-Argentine team of Benjamin Becker and Leonardo Mayer defeated. During the grass season, he reached the finals twice: in the Queen's Club in the finals he defeated Sam Querrey 7-6 3 and 7-5, in Newport Fish celebrated its 4th Tournament on the ATP World Tour , his first individual title on grass. He defeated in the finals of the Belgian Olivier Rochus in three sets 5:7, 6:3 and 6:4. By this success, he again reached a position among the top 50 of the ATP world rankings. The North American hard court season was even more successful for Fish. He won the next tournament in Atlanta , where he his compatriot John Isner in three hard fought sets 4:6, 6:4 and 7:6 4 beat. This further tournament promoted him 14 places to number 35 on the front of the ATP - Rankings. In Washington, he won it with Mark Knowles of the double contest against the Czech duo Tomas Berdych and Radek Stepanek. At the Masters tournament in Cincinnati confirmed its strong form Fish: he reached the finals and beat on the way the top-ten player, Fernando Verdasco, Andy Roddick and Andy Murray, whom he defeated for the third time this season. In the finals he defeated despite very good performance but then Roger Federer, who nearly 6:7 5, 7:6 1 hit, 6-4. Despite the final defeat, he rose in the world ranking by 14 places to 21st place After the U.S. Open, where the tip current as Fish in the second round at eventual finalists Novak Djokovic failed, he came first time since 2004 in the top 20th His last tournament in 2010, Fish played in Beijing , then he had to quit due to injury earlier this season.

The 2011 season started out below expectations, both in the preparation tournament in Brisbane as well as directly at the Australian Open Fish separated already in the second round. But with the next hard-court tournament in the United States Fish and penetrated further into the field: in Memphis, Delray Beach and the Masters tournament in Miami, he reached the semifinals, only in Indian Wells, he suffered a surprising defeat against the young Milos Raonic. These services are then led in succession to the fact that Fish first moved into the top 10 and Andy Roddick replaced as American number one. The clay court season in Europe was expected to be less successful, but he could at Roland Garros to celebrate a success there he moved first to the third round where he was then but the Frenchman Gilles Simon had to admit defeat. Fish then had an injury no warm-up tournament for Wimbledon challenge, but he reached the lawn at the classic quarter-finals, where he was against the eventual finalist Rafael Nadal lost. Disappointing was the Davis Cup match against Spain, where he lost both singles matches before a home crowd, and thus contributed to the resignation of the United States. As expected, Fish successfully launched in the North American hard court season in the summer: In Atlanta, he could defend his title and beat in the finals last year as his compatriot John Isner . Even in Los Angeles a week later he reached the finals, where he lost but surprisingly the Latvian Ernests Gulbis. At the Masters tournament in Montreal Fish continued to be very successful: In 2011, he had never seen the second round achieved, this time he came but to the front finals where he narrowly world number one Novak Djokovic defeated and, thus, in his fourth attempt in the finals of a Masters tournament in the cold had, however, gave him the final participation valuable points and he reached his previous record with the world, ranking seventh A week later he arrived in Cincinnati the semifinals, but lost there against Andy Murray, having previously been in the quarter-finals Rafael Nadal defeated. Due to these good results, Fish won the U.S. Open Series 2011 - with the highest score since the introduction of the series.

Profile and Biodata of Mardy Fish