Ivan Ljubicic was born on March 19 1979 in Banja Luka, SR Bosnia and Herzegovina, Yugoslavia. Ivan Ljubicic began his career in 1998. The best place in the tennis world rankings, he had to show for 2006, where he has found its way to number 3 on the ATP Entry List. At the tournament in Lyon in 2000, he struck first in the first round, Gustavo Kuerten in the semifinals and surprisingly Marat Safin. In the finals he beat Moroccan Younes El Aynaoui 6-3, 6-2 and was able to post his first tournament victory. In his strongest season yet in 2005 he won within two weeks of the tournament in Metz and the BA Tennis Trophy in Vienna. Additionally, he stood six times in a final and lost three times against Roger Federer. Ivan Ljubicic strengths are his constant service to the 200km / h and his one-handed backhand. 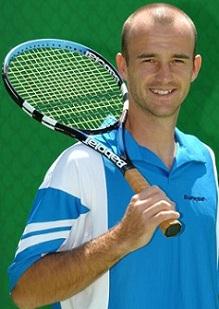 Ivan Ljubicic became famous when he was with Croatia against the United States in the first round of the Davis Cup took 2005thFirst, he defeated Andre Agassi in three sets. The following day Ljubičić beat on the side of Mario Ancic , surprisingly, the top double Bob Bryan / Mike Bryan . On Matchday Ljubicic defeated yet Andy Roddick in a five-set thriller, which meant that the first time Americans back home in the first round of Davis Cup were eliminated. Ljubicic continued his winning streak in Davis Cup and almost single-handedly led Croatia to Davis Cup win.

In 2006, he was able to initially build on its achievements from the previous year. He won three tournaments (Chennai, Zagreb and Vienna). He also reached the semifinals at Roland Garros. After an argument, he took over as Croatia's Davis Cup captain Playing team after a victory against Austria and then retired from Croatia against Argentina.The 2007 season began with his 7th Ljubičić Career titles in Doha . In addition, he was in Zagreb and Rotterdam in the finals, but lost both finals in short supply.

His major triumph celebrated Ljubicic in March 2010, when he for the fourth final of the inaugural tournament in a Masters series was eventually successful and the Indian Wells Masters won.

Profile and Biodata of Ivan Ljubicic