David Villa was born on December 3 1981 in Tuilla, Spain. From the village of Tuilla (Asturias), David Villa came from a mining family (his father was a miner for 27 years, his grandfather and his great grandfather were also). In his early teens he broke his right leg and the doctors predict a final adoption of the football. His father encouraged him to continue and to work his left leg to compensate. Therefore David Villa has thought about down the mine like the rest of his family. Still he starts to play, without the permission of doctors in regional club UP Langreo where he operates in the lower grades until he was 17. Then he began his career with 19 years Real Sporting de Gijon, where he played two full seasons in the second division. With its 39 goals in 92 games, he was transferred to Real Zaragoza where he confirms his talents for two seasons. Valencia CF took Villa in 2005 for twelve million euros from Real Zaragoza. With Los Ches 2008 he won his second Copa del Rey. At Villa Valencia CF's annual top scorer of his club and he won four times the Trofeo Zarra, the price for the Spanish player with the most goals in the Primera Liga in 2005/2006 (25 goals, one fewer than Pichichi Samuel Eto'o ), 2006/2007 (16 goals), 2008/2009 (28 goals) and 2009/2010 (21 goals). On 19 May, FC Barcelona on its website that an agreement was reached with Valencia CF for the transfer of Villa. FC Barcelona paid forty million euros for the striker. Villa was at FC Barcelona, ​​the eleventh Asturian footballer After including striker Quini (1980-1984), defenders Julio Alberto Moreno (1982-1991) and Abelardo Fernández (1994-2002) and midfielder Luis Enrique (1996-2004). On Wednesday, Aug. 25 made ​​his Villa debut in Camp Nou , scoring his first goal. 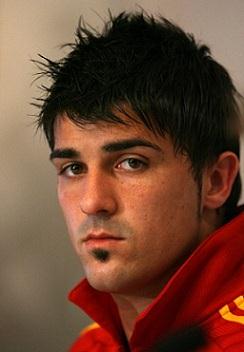 On February 9, 2005, David Villa against San Marino in its debut national team of Spain. His first goal was the aggressor on November 16, 2005 in uitduel against Slovakia. His performance at Villa Valencia CF have finally a place in the Spanish squad for the 2006 World Cup match. During the World Cup was also Villa six goals, which he and seven other players in second place in the score list snuggled. He immediately scored twice in the first game against Ukraine (4-0) and gave himself as a starting place for the rest of the tournament. However, the finite in the eighth finals against France (1-3), although Villa had opened the score still a penalty.

At Euro 2008 was the first game against Villa in Russia immediately three goals (4-1 profit). He is the seventh player with a hat trick in a European Championship. Villa played the game then, despite a broken finger, just another note, scoring the decisive goal against Sweden (2-1 win) so he was top scorer with five goals at Euro 2008. In the semi-final match against Russia, David Villa was injured in the first half. As a result he missed the final of the European Championship between Germany and Spain, with 0-1 in favor of Spain has been decided. With La Furia Roja Villa took one year later participated in the 2009 Confederations Cup , which was won third place.

In 2010 he went with the Spanish selection to the 2010 World Cup in South Africa. In the second game of the group stage brought Villa's decision. He made ​​it with two goals that Spain won 2-0 in Honduras. The attacker then missed a penalty which he scored just under hattrick. Against Portugal in the eighth finals, he made ​​the only goal, which Spain won 1-0. A similar scenario had the game against Paraguay in the quarterfinals, he made ​​the decisive goal which Spain won 1-0. In the semifinal against Germany, Villa did not score. Spain eventually won 1-0 thanks to a late goal from Carles Puyol. In the final against Netherlands played Villa, but was changed for Fernando Torres. Eventually scored Iniesta extending deep into the 1-0 and Spain won the World Cup in South Africa. David Villa had five goals to his name finally managed to put this, he shared with top scorer Wesley Sneijder, Diego Forlan and Thomas Müller. The Golden Shoe, however, went to Thomas Müller, based on the larger number of data and therefore assists the trophies at home with. Since 25 March 2011, Villa all-time top scorer in the Spanish national team by scoring twice against the Czech Republic.