Ronaldinho Moreira born on 21 March 1980 in Porto Alegre, Brazil. Ronaldo de Assis Moreira, who later became famous with the name Ronaldinho, spent his youth in the bosom of a poor family who lives in the Brazilian city of Porto Alegre. It is the third and last child of Dona Miguelina Da Silva and Joao Moreira.

Gremio & PSG
Ronaldinho began his career at Gremio, where he was one of the stars. In 2001 he signed a contract with French club Paris Saint-Germain . Grêmio Ronaldinho's contract was indeed at an end, but since the Bosman Judgement is not true in Brazil, he could not leave without compensation. Grêmio demanded why 23 million euros in damages, something PSG initially refused to pay. After intervention by the FIFA , the case is settled and Ronaldinho could play for PSG. In 2003, Ronaldinho wanted to leave PSG and various clubs offered the Brazilian a contract. Eventually, Manchester United and FC Barcelona have. The good relationship between Ronaldinho and Sandro Rosell , vice president of FC Barcelona and former director of Nike in South America, was an important factor in the eventual choice of FC Barcelona, ​​which he has paid 27.5 million euros. 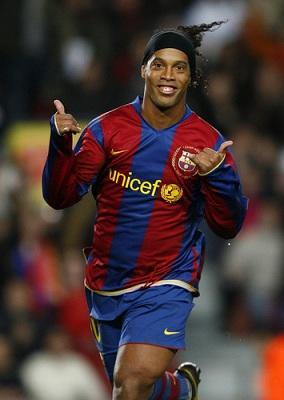 FC Barcelona
He debuted on July 28, 2003 in the exhibition game with Juventus. His first goal came two days later against AC Milan. After a price without first season Ronaldinho was in the 2004-2005 season champions of Spain with FC Barcelona. In August 2005 came the Supercopa. On October 26, 2005 Ronaldinho playing against Málaga CF hundredth game for FC Barcelona, ​​which he won 2-0 goal in the game scored. In 2006, Ronaldinho won the Spanish title, and at the expense of Arsenal FC, ​​the Champions League. In the following two seasons he won no prizes and given shape to deal with crisis and various injuries. Ronaldinho gave his apparent weight during his last season, also nicknamed El Gordinho (The little fat), thus creating a reference to El Gordo ( El Gordinho refers to his name that Ronaldinho Ronaldo small means), the nickname of Ronaldo . On July 16, 2008 Ronaldinho signed a contract for three seasons he connected to AC Milan. FC Barcelona received 21 million euros for him.

Milan
On 28 September 2008 Ronaldinho made ​​his first goal for Milan against city rivals Inter Milan. The move of Ronaldinho to Italy was the first season, not what the employer and star player of Milan is expected. Injuries played tricks on the Brazilian and the head coach Carlo Ancelotti preferred to others. In his second season he was more visible, gave many assists and scored important goals. So he scored in both matches with Juventus two goals and a hat-trick against Siena. In the first half season of his third season, he hardly action.

Flamengo
In 2011, Ronaldinho decided to return to Brazil. AC Milan gave permission to negotiate with Grêmio and Flamengo, although Palmeiras and Blackburn Rovers had shown interest. According to Ronaldinho, the Italians had around eight million euros in costs. Ronaldinho chose for Flamengo, which three million euros for him on the table laid. The former World Footballer of the year at his new club signed a contract for 3.5 years and in return receives a salary of 130,000 euros per week.

Ronaldinho debuted on June 26, 1999 against Latvia for the Brazilian football team. That same year he won with the Divine Canaries the Copa America. In 2002, Ronaldinho was the national champion team during the World Cup in South Korea and Japan. His World Cup goal he made ​​against China from a penalty kick. In the quarterfinal against England, made ​​a Ronaldinho free kick goal by a great distance behind goalkeeper David Seaman to shoot. It meant the winning goal (2-1), after Ronaldinho earlier in the game already had the pass for the tying of Rivaldo. In 2005, won the Divine Canaries in Germany, the Confederations Cup final by arch-rival Argentina 4-1 defeat. Ronaldinho, who scored in the final, got the trophy as captain. At the World Cup in Germany in 2006 he was with Brazil in the quarterfinals with (1-0) defeated by France. It marked the end of a disappointing tournament for both the Brazilian squad as Ronaldinho, who had to deal with a crisis form.
Ronaldinho was in the spring of 2010 a setback in the national team of Brazil. Coach Dunga has selected him for the team that would reach the world championship of 2010.