Caroline Wozniacki born on 11 July 1990 in Odense, Denmark. Caroline Wozniacki has won several junior tournaments. In his first pro tournament in the WTA, in Cincinnati in 2005, lost the first round against the number one seeded Patty Schnyder. In 2006 some dispute in the WTA tournament getting the best result the quarter-final wins in the same year, the 2006 Wimbledon Girls' Singles. In October 2007 at Tokyo, dispute her first WTA semi-final in a tournament being defeated by American Venus Williams . 2008 is the year of the consecration of the young Danish tennis player. Caroline Wozniacki, in fact, succeeds in winning the first WTA tournament ( Stockholm, New Haven, Tokyo ) and participates in the Beijing Olympics being eliminated in the third round by Russian Elena Dementieva. At the end of the season 13.mo Caroline is the place of WTA ranking. 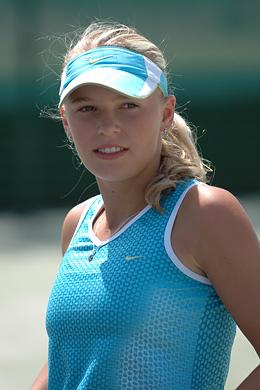 Wozniacki in 2009 confirms the maturity of the previous year were able to achieve results of prestige. Wins three tournaments ( Ponte Vedra Beach, Eastbourne, New Haven. Performs well in Grand Slam tournaments: the third round Australian Open and Roland Garros, second round at Wimbledon and at the final of U.S. Open . Finished the season fourth in the WTA rankings.

The year 2010 began well enough to Wozniacki. Is eliminated in the second round at the ' Australian Open . Then, reaching the finals at Indian Wells, is eliminated in the quarter to Miami, won the tournament in Ponte Vedra Beach. After repeated his success in the tournament in Ponte Vedra Beach injures his ankle during the semi-final tournament of Charleston in an attempt to retrieve a drop shot of his opponent Vera Zvonareva thereby breaking a streak of 8 consecutive victories on the green earth American. At Roland Garros quarter-final exit beaten by Francesca Schiavone, who after a few days on earth will triumph in Paris. The grass season is less fortunate: in the first round out of Eastbourne and Wimbledon is beaten for the fourth round 6-0, 6-2 to Petra Kvitova . Winning the tournament draws Copenhagen beating Klara Zakopalova , but is deleted shortly after the third round of Cincinnati by Marion Bartoli 6-1, 6-4. The August 23 tournament wins Montreal beating in the final 6-3, 6-2 to Russian Vera Zvonareva , the following week also won the tournament in New Haven beating in three sets 6-3, 3-6, 6-3 to Russian Nadia Petrova.
After being eliminated in the semifinals rather than definitely the U.S. Open finds a smile during the Toray Pan Pacific Open in Tokyo where he won the title after beating for 1-6, 6-2, 6-3 to Russian Elena Dementieva, for she is the fifth win of the season. In the next tournament in Beijing, the third round with victory over Petra Kvitova, mathematically reach the top of the rankings WTA, becoming the 20th player No. 1 in the world. The October 11 won the tournament in Beijing defeating Russia's Vera Zvonareva with a score of 6-3, 3-6, 6-3. Finished the season ranked at the top of the WTA losing in the final Masters in Doha against Kim Clijsters.

Profile and Biodata of Caroline Wozniacki