Robert John Isner born on April 26th 1985 in Greensboro , North Carolina. During his studies at the University of Georgia Isner was very successful in college tennis , so he decided in the summer of 2007 a ​​professional tennis player. The first futures immediately he won, the next challenger and an ATP tournament he already lost in the first round. In July 2007 he won a challenger, however, making it within one month to the 839th position in the ATP rankings to 416th position had shifted.
By Fernando Gonzalez at the last moment withdrew at the ATP tournament in Washington, Isner got a wildcard for the tournament. During that tournament he won among other things, Tim Henman , Gael Monfils and Tommy Haas , and only in the final 6-4, 7-6 to be stopped by his compatriot Andy Roddick .
Because of his success gave him access to the ATP tournament in Cincinnati , New Haven ATP tournament and the U.S. Open . In Cincinnati he lost in the first round of David Ferrer , New Haven in the second round again losing to the Spaniard. Isner at the U.S. Open did it to the third round kick, where Roger Federer outsmarted him, but Isner was one of two players at the U.S. Open managed to steal a set from the Swiss.
After Isner played only challengers, because he performed well in these tournaments he earned at the end of the season 107th position in the ranking. Isner was also a practice partner for U.S. Davis Cup team.
In 2008 through its listing on the 107th ranked Isner had direct access to the Australian Open , he lost in the first round already 6-2, 6-2, 6-4 to Fabrice Santoro . The doubles tournament went not so good for him and his partner Ivo Karlovic , where they have been eliminated in the first round. By victories on the ATP tournament in San Jose Isner landed in the top 100, on the 93rd position. In summer, however, he would again fall outside the top 100 by disappointing results.

At Wimbledon in 2010 came Isner in the first round against Frenchman Nicolas Mahut , that party began on June 22 and was 11 hours and 5 minutes the longest match in the history of tennis . In the late evening of 23 June was the match because of darkness interrupted by a stand of 6-4, 3-6, 6-7 7 , 7-6 March and 59-59. On June 24 there was more, but Isner won the match 70-68 in the fifth set. Both players have besides breaking the record for the longest match is also the record of most aces in a match interrupted. This record was held by Ivo Karlovic (77 aces) and the record stands at 112 aces for Isner, Mahut hit it 103. [1] Furthermore, in the party also set the record for the longest (8 hours and 11 minutes) , the record for most number of games (183) in a party to the largest number of aces in a party (215) and for the longest playing time on one day (7 hours and 9 minutes on June 23) is located. 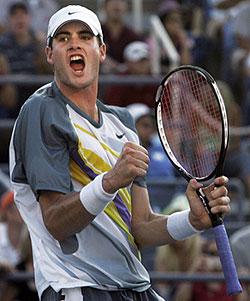 Profile and Biodata of John Isner