Marion Bartoli born on October 2, 1984 in Le Puy-en-Velay, Auvergne, France. Marion Bartoli has an unconventional style of play and hit both forehand and backhand with a double mount. She has hard ground strokes and an aggressive playing style. She is trained by his father, the doctor Walter Bartoli.

Marion Bartoli became a professional player on the WTA Tour in February 2000. She has so far (July 2007) has won three WTA titles in both singles and doubles and six singles and a double titles in ITF tournaments. At best ranked Bartoli in singles in ninth place (October 2007) and in doubles in fifteenth place (July 2004).

His first singles titles in ITF tournaments won Bartoli 2001 (Hatfield, Turin, Koksijde). The same season she made her debut in the WTA tournaments. She followed up in 2002 with victory in the ITF tournament in Columbus and Poiters. It was not until 2005 that she won her next single title (ITF / Dubai).
As WTA players had Bartoli in the beginning more success in doubles. She won her first WTA title in doubles in 2004 with countrywoman Emilie Loit . In 2005 season she won her second title in German Anna-Lena Groenefeld. 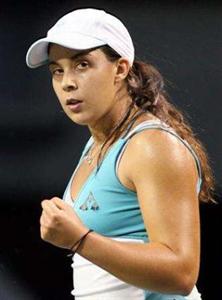 Her breakthrough season became the 2006th, She won the three singles titles on the WTA Tour. In January 2006 finals she defeated Vera Zvonareva in Aukland, later in the season Aiko Nakamura in Tokyo and then Olga Poutchkova in Quebec. In season, noted she also gains the player Patty Schnyder and Nadia Petrova in various tournaments.
In 2007 season Bartoli reached the fourth round of the French Open and later in the summer UNSEEDED singles final of the Wimbledon Championships . On the way to the Wimbledon final she defeated several top players, including first seeded Justine Henin (1-6, 7-5, 6-1) in the semifinals. In the following final match, she met American Venus Williams who won with the numbers 6-4, 6-1. Marion Bartoli took part in the French Fed Cup team 2004th She then played two games of which she won one.

Profile and Biodata of Marion Bartoli