Andrew Stephen Roddick on August 30 1982 in Omaha , Nebraska. Roddick plays mainly with a strong forehand and tried to run around his backhand a little weaker. With his forehand, he scored many winning shots, but his greatest strength is his serve (his mark with 249 km / h for a long time was the record). Roddick 30 singles and 4 doubles titles won in the ATP circuit.

Roddick began his professional career at the age of 18 years in 2000 and finished the year as the youngest player in the top 200 of ATP.The same year, Roddick (aged 21 years and 2 months) as the youngest Americans for the first time the tennis world rankings and the third-youngest player (after Lleyton Hewitt with 20 years and 8 months and Marat Safin at 20 years and 10 months) at all at. 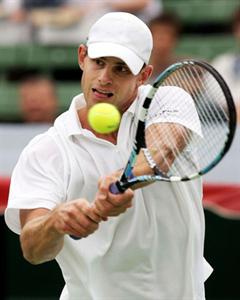 In 2006 he had a big dip. He swaps coach twice (first Dean Fine Gold , and then his older brother John Roddick ) and try it since August 26 with a new coach, hoping his career new impetus. This coach is none other than the famous American Jimmy Connors , a former tennis player who in his heyday many grand slams to his name written. Two years later, stopped Jimmy Connors as coach because he wanted more time to spend with his family. Roddick's older brother trained him since then.

Roddick was just before Roland Garros in 2008 suffered from a shoulder injury and could not make it to the French tournament, he recovered from the injury this time and could soon take office in Wimbledon . During that tournament, he was already in the second round by Janko Tipsarevic . In August, Roddick does not participate in the Olympics , he would want to prepare for the U.S. Open . In New York he was able to get to the quarter-finals, here he was eliminated by Novak Djokovic.

In 2009 Roddick had in the beginning of the year Larry Stefanki as coach attracted in the past has trained a number of top players like John McEnroe , Yevgeny Kafelnikov , Fernando Gonzalez and Tim Henman. At the Australian Open he reached the semi-finals, but he lost in three sets to smooth Roger Federer. Shortly thereafter, Roddick defeated Radek Stepanek 7-5 and 7-5 in the finals in Memphis and won for the second time now the Regions Morgan Keegan Championships. He ended 2009 as number 7 in the world.

In 2010 Roddick started the season well. At tournaments Brisbane Roddick grabbed his first title of the year. He defeated in the final Radek Stepanek 7-6 (2), 7-6 (7). During the Australian Open Roddick did not go beyond the quarterfinals where he lost to Marin Cilic . Both the ATP tournament in San Jose and in the Indian Wells ATP tournament reached the finals of the American. He lost it or of Fernando Verdasco and Ivan Ljubicic . In Miami Roddick took his second title of the year. He defeated in the finals of the Czech Tomas Berdych . He then absentia for the tournament in Rome, because of personal reasons and the tournament in Madrid, due to illness. He made ​​his comeback at Roland Garros where he lost in the third round of the Russian Tejmoeraz Gabasjvili . The grass season began for Roddick's tournament in Queens . He lost in the third round of Dudi Sela . It was his worst performance ever at the Queens Club. At Wimbledon , he lost the fifth set of head in the fourth round of Lu Yen-Hsun with 6-4,6-7 (3) ,6-7 (4) ,7-6 (5) ,7-9. Roddick's store was broken only once during the match. At the tournament in Atlanta reached the semifinals, he lost the subsequent winner Mardy Fish . At the tournament in Washington, then he lost in the third round of the Frenchman Gilles Simon . This loss meant that the American for the first time since 2006 in the top 10 fell. Due to illness did not take part in the tournament of Toronto . Later it emerged that Roddick was already several weeks felled by a mild form of glandular fever.

Roddick plays mainly with his strong forehand and backhand less with its slightly weaker. He is a true baseline player with a very good serve, which he much aces beats. Occasionally he plays serve-volley for his opponent by surprise. On September 24, 2004 drew Roddick holds the record for the fastest storage with 155 mph (249 km / h) during a match in the semifinals of the Davis Cup against Vladimir Voltchkov of Belarus . On March 5, 2011 he played this record spent on Ivo Karlovic , in the dual match of the Davis Cupontmoeting between Croatia and Germany a service of 251 km / h or 156 mph hit.

Profile and Biodata of Andrew Roddick