The full name of Shahid Afridi is Sahibzada Mohammad Shahid Khan Afridi who was born in the year 1980 March 1 at Khyber Agency, FATA, Pakistan. Afridi is the All rounder in Pakistan cricket. Afridi is a hard hitter and aggressive player in any format of the cricket. Afridi holds the record of Fastest century in one day cricket. He also scored 32 runs in a over which is the second highest record runs in a over. 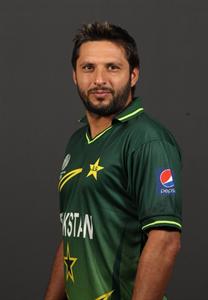 Afridi is also a good leg spinner and right handed batsman. Afridi is the current highest wicket taker in T20 cricket. Afridi is the only person to hit most number of sixes in one day cricket. In 2009 Afridi was appointed as the Captain of Pakistan T20 squad. Afridi made his test debut in the year 1996 October 2 against Kenya and ODI debut in the year 1998 October 22 against Australia. Afridi holds the world record of fastest century in ODI cricket from 37 balls against srilanka in his second International match.

He also become youngest player to score a century in ODI cricket. In his first test Afridi showed some good bowling performance with 5 wickets in the match. Afridi scored his first test century of 141 runs against India. In 2005 Afridi continued his form in both batting and bowling in test where he scored a quick half century and taken 3 wickets against India. In 2005 Afridi again set a record of second fastest century from 45 balls.

In 2007, Afridi showed some brilliant bowling performance in 2007 World T20 where he was awarded man of the series in that tournament. He also played some match winning innings in 2009 ICC T20 world cup where he scored 50 important runs in semi final and 54 runs in the final which lead Pakistan to win the tournament.