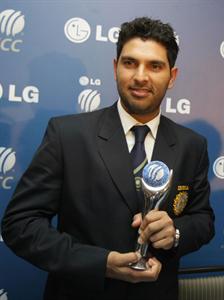 The most memorable performance of Yuvraj Singh is the 6 sixes in a over in a T20 match which is the world record in International cricket against Stuart Broad of England. Yuvraj Singh is a left-handed batsman and a slow left arm bowler. His match winning innings against England in Natwest series final is also unforgettable for the cricket fans.

Yuvraj scored his first century against Bangladesh in 2003. Yuvraj Singh had a great year in 2006 where he was awarded three Man of the series award in different tournaments against South Africa, Pakistan and England where he scored a total of 3 centuries and 4 half centuries and this consistent performance of Yuvraj Singh made his rankings in top 10. In 2008 Yuvi scored 138 runs from 78 balls against New Zealand. Yuvraj Singh showed his real talent and brilliance in 2011 ICC World cup and his all round performance lead India to take 2011 ICC world cup.