The full name of MS dhoni is Mahendra Singh Dhoni who was born in the year 1981 July 7 at Ranchi, Bihar (now in Jharkhand), India. Dhoni was the current Captain of Indian cricket team. Dhoni is famous for coolest captain of India in any format of the cricket. Dhoni is also a best wicket keeper in India. 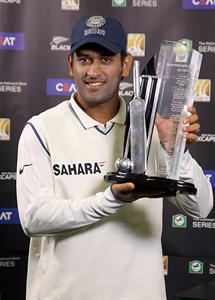 Dhoni is also the captain of IPL team Chennai Super Kings. Dhoni made his test debut in the year 2005 December 2 against SriLanka and one day debut against Bangladesh in the year 2004 December 23rd. 2011 IPL trophy is lifted by Chennai super kings under Dhoni's captaincy. Dhoni has a sister named Jayanti and a brother Narendra. Dhoni was married to Sakshi on July 4 2010. Dhoni's favorite hobby is riding bikes. He has 23 bikes and 4 cars. Dhoni completed his schooling from DAV Jawahar Vidya Mandir, Shyamali, Ranchi.Dhoni also play football

MS Dhoni started his one-day career against Bangladesh in the year 2004, but the start was not good for him as he was out for a duck in the debut. His batting skills was firstly shown against Pakistan which is his second series after Bangladesh tour and scored 148 runs from 123 balls which is a record for Indian wicket keeper for highest score by a Indian wicket keeper.

Dhoni again showed his brilliant batting the year 2005 against Sri Lanka where Dhoni scored a match winning innings of 183 runs from 145 balls. In 2007 Dhoni was appointed as the captain of Indian T20 and won the ICC world T20 2007 under Dhoni's captaincy. 2009 was a great year for Dhoni where he scored 1198 runs in that year.