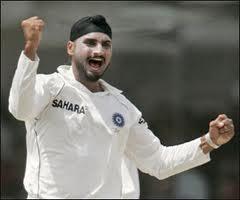 The first coach of Harbhajan singh is Charanjit Singh Bhullar where he trained as a batsman in those days, but later he concentrated in spin bowling and became one of the best spinners in the world. At the age of 15 itself Bhajji showed some amazing skill in his spin bowling where he got a place in Under 16 Punjab team and got 12 wickets in a match against Hariyana. With his amazing performance in Under 16, he was selected for Under 19 national team.

Harbhajan started his first class cricket against services in the year 1997. In his ODI debut match Bhajji took 1 wicket, and India won that match against New Zealand. One of the main specialty of his bowling is his ability to bowl Doosra which is difficult for a batsman to play. Harbhajan also showed some great performance with his bat. In test cricket harbhajan won 3 Man of the series and 6 Man of the match awards. In ODI cricket Bhajji won 3 Man of the match awards.