Fear 3, developed by Day 1 Studios for Microsoft Windows, PlayStation 3, Xbox 360 and the OnLive cloud gaming service is a sequel to the game Fear 2: Project Origin. This is the third installment of the Fear series. This was announced on April 8, 2010 and is stated to include John Carpenter helping on the cinematics as well as writer Steve Niles.

Fear 3 contains features like "co-op, an evolved cover system, and more scares", according to the Day 1 studios founder and president Denny Thorley. In this game the player mainly control either Point Man or Paxon Fettel, the protagonist or the antagonist of the game respectively, from its first game named Fear. The control system for this game is similar to its previous ones.

It gives the player a list of commands which is typical of most first person shooter games (the ability to fire weapons, throw grenades, melee, activate/use items etc), as well as the ability to slow time. As, Fettel the player helps the point man using telekinesis, possession, stun, a melee attack which is unique to Fettel and other abilities. This game also provides both online and offline Co-Op help. Once a player completes one level as Point Man, in the multi player mode, one can replay that level in single player as Paxon Fettel. 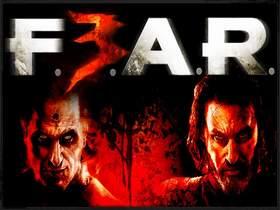 Nine monthes after the events of the previous two games, the Point Man was captured by Armacham Security and was interrogated in an asylum. Paxton interrupts the interrogation and helps free the Point Man. The two form an uneasy alliance and escape the Asylym through the slums. In a helicopter they return to Fairport to regroup with FEAR operative Jin Sun Kwon. Fighting their way through the brothers met up with Jin. Jin plays arecorded video footage of Micheal Becket who brought to light his rape and is slated by Armacham for transport.

Using an automated transport, the point Man and Fettel assault the local airport to intercept Becket, killing the Armacham personnel. In order to gain more Intel from Beckett, Fettel posses him and thus gets to know his identity and reveals it to the point man and Becket gets to know about the Point man's identity.. Fettel's release of Beckett proves fatal, causing an explosion. The Point Man and Fettel head towards an old training facility by Harlan Wade years ago to study and develop the prototypes. They start to destroy items associated with memories of their childhood or past to cause damage on the lingering echo of Harlan Wade known as The Creep. Just after destroying a monstrous apparition of Wade, one of two endings is possible, depending on multiple factors or on the person who is playing the game. For a single-player, a good or an evil ending may occur depending on the player who has controlled the Point Man or Fettel. Alternatively, if played during co-op, the player with the higher score determines the ending. The good ending will show Point Man overpowering Fettel and vice-versa, with the ending depending on whether Point Man or Fettel had survived their final struggle.

The Point Man when ends the game shoots Paxton three times in the head and watches his body spontaneously burn itself up. Then he walks over to Alma to finish the job when he notices that her baby has been born successfully. Alma's body then disappears, as the Point Man receives a transmission from Jin that everything was finally over and thanked him for his efforts. He takes the baby in his left hand and leaves the room.

The Paxton Fettel ending has Paxton possessing the Point Man's body and at any cost extracting the baby from Alma's swollen body. He then promises to raise the child as it was his own, but he sets it aside as he notices Alma. Fettel then pounces on his mother, and eat her violently.

Interested to know how to increase the score while playing Fear 3? To know more about the Fear 3 Gaming strategies one can try to follow the following Fear 3 tips and tricks given below: