Sidney Crosby, born on the 7th of August, 1987 is a professional Canadian Hockey player. He not only plays for his team, Pittsburgh Penguins but also for his Country Canada. Because of his amazing performance Crosby is now the captain of the Pittsburgh Penguins. He earned awards like CHL Player of the Year and lead his club to a place in the 2005 Memorial Cup.

Profile and Biography of Sidney Crosby 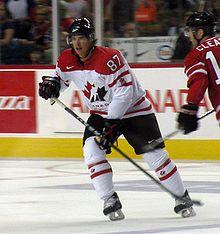 Lundqvist began playing Hockey at a very young age. At the age of 14 he scored 217 points playing midget hockey against a 17 year old. Crosby also played in the QMJHL for Rimouski Oceanic where he became one of the most highly anticipated prospects in the NHL history. After that in 2005, following the lockout, every NHL team participated in a draft lottery which became known as the "Sidney Crosby sweepstakes". In this match the penguins won their first overall and Crosby has lived up to the hype.

Crosby later became the first teenager in professional sports history to win a scoring title in the 2006-07 after he won the Art Ross trophy. He was voted as the most outstanding player by the Players Association. He was also the first teenager to win the Hart Trophy for league MVP.

Crosby then broke the Penguins Rookie scoring records previously held by Mario Lemieux. And at the end of the season 2006-07, Crosby became the youngest captain in NHL history. The next season 2007-08 he suffered through a high ankle sprain forcing him to miss around 30 games. He is currently tied for the NHL playoff scoring lead. He is also the youngest player ever to score 100 points in an NHL season and the first rookie ever to score 100 points and amass 100 PIM in his first season.

In 2010-11, Crosb had a 25 game point streak, which began on 5 November, 2010 against the Anaheim Ducks and ended December 28, 2010 against the New York Islanders. During this streak he made 27 goals which included three hat-tricks, 24 assists and 51 points. This is the 11th longest point streak in the NHL history.

Crosby apart from all this holds the record to score in the World junior championship as the youngest player ever. He played for Canada when he was only 16 ears old in the 03-04 tournaments. Crosby also won gold at the 2005 World Junior Championships.