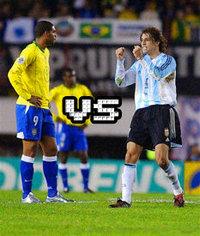 The match will really help both teams to set up a good team for the coming Brazil World Cup. The match is mainly conducted to make a good line up and to find out new players for both teams. After showing a bad performance in Copa America football held last month, Both teams never played a big match. Brazil will line up with new players in the match.

Date and Venue of Argentina Vs Brazil September 2011

Second match between Argentina Vs Brazil 2011 will be held at Brazil after two weeks of the first match. Date is not officially fixed