Denis Istomin who was born on the7th of September, 1986, is a former number 1 and an Uzbek tennis player. As of the 25th of July, 2011, Denis Istomin current ranking is World Number 80 on the WTA rankings. Denis Istomin coach was his mother.

Profile and Biography of Denis Istomin 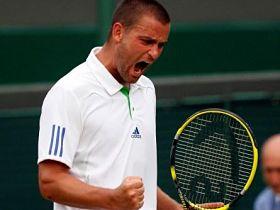 Ana was introduced to tennis at a very young age of five years. His parents supported his whole heartedly in the playing of Tennis. His mother was his first coach. Istomin broke into the top 200 late in 2005 and finished the year at 196.

In 2006, he received the wildcard into the 2006 Australian Open where he played Roger Federar, then world Number 1. Federar won in three sets. He finished the year ranking 200.

2007 was a slightly less successful year for Denis. He moved out from the Top 200 to 230, again claiming the Asian Wild Card Entry Spot for the 2008 Australian Open. He had a better year in the doubles and reached a high career rank of 157 on June 18th.

In 2008, Istomin entered the 2008 Australian Open as the Asian wild card. He lost in the second round to Lleyton Hewitt in four sets. He finished the season ranked World Number 105.

Istomin again received the Asian Wild card in the 2009 Australian Open. He won in the first round losing the second. He had the most successful year and he came up to the Top 100 and reaching a high peak of World Number 56 in July 2009. This rise in the ranking qualified him for the other Grand Slam tournaments. His best performance was gained by reaching the third round of the US Open.

In 2010, he first participated in the Australian Open. In the first round he defeated the World Number 32 and then Michel Berrar in the second. In the third he himself was defeated by Novak Djokovic.

For the first time he made at the semi finals of an ATP level tournament t the 2010 SAP Open. At the 2010 Pilot Pen Tennis, Istomin reached the first ATP Final. He also reached the third round of the Wimbledon, French Open and US Open that sent him on his highest career ranking of World Number 39 on the 30th of August.

At the 2010 US Open, he passed the first round but was defeated in the second by the eventual winner Rafael Nadal, his rank slipping down to 42.