Andre Kirk Troicki, born on the 10th of February, 1986 is a Serbian professional tennis player. As a professional player Viktor Troicki highest ranking has been World Number 12. He won his first ATP singles title at the 2010 Kremlin Cup. He also won the ATP Doubles Title with Christopher Kas at the 2010 PTT Thailand Open. His biggest achievement was when he won the Serbia's Davis Cup final against France in 2010.

Profile and Biography of Viktor Troicki

Troicki started playing Tennis from a very young age of five. He turned professional in the year 2003 and played for the Futures Tournaments in Serbia. In 2004, he won his first tennis Tournament in Nis. He won his first Challenger Tournaments also in Belgrade in 2005.

In 2006 he made his debut at the ATP Tour in Tokyo. In June 2007, in Umag He had his biggest win over World Number 3 but eventually lost in the semi finals. 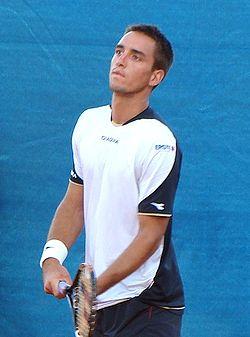 In 2008, Troicki first entered a Grand Slam in the Australian Open. His first match agan Rafael Nadal, he gave the champion a tough competition though losing the game. His next appearance was in the ATP Masters series where he reached the second round being defeated to Andy Roddick. His next matches did not bring him much good results. At the US Open he proceeded to the second round being defeated by Rafael Nadal.

In 2009 March, Troicki plaed the Serbian Davis Cup team losing to David Ferrer. Troicki then for the first time entered the 2009 Wimbledon Championships as number 30. He proceeded to the third round and won a five setter game in the second. He reached another Final of the Thailand Open. He also defeated the 2008 Australian Open Finalist, Jo-Wilfried Tsonga to reach his second ATP World Tour final losing it.

He began the year 2010 as the 5th seed in the 2010 Qatat Open and advanced to the semifinals. He lost in the second round of the Australian Open. An elbow injury stopped him from playing some matches. He also competeted in the 2010 Dubai Tennis Championships but losing it. Troicki was a part of the 2010 Serbia Davis Cup Team which reached the final for the first time and winning it with Troicki winning the deciding match.

In 2011, Troicki started in ATP Doha losing to Roger Federar. He reached the third round of the Australian Open for the first time losing the next due to a stomach pain. He next plaed at the 2011 ABN AMRO Tournament and reached the semifinals without losing a set then falling to Robin Soderling. He also represented Serbia in the first rounds of the Davis Cup wining the first two matches. At the French Open, he reached the fourth Round losing to Andy Murray but gained his latest career rank of World Number 12.