Dinara Mikhailovna Safina was born on the 27th of April, 1986 in Moscow. She is a Russian Professional tennis player. Dinara Safina Highest Career Ranking had been World Number 1.
Safina was the runner up in the singles of 2008 French Open, 2009 Australian Open and the 2009 French Open. Still she had success at the Grand Slam event of Women's Doubles by winning the 2007 US Open with Nathalie Dechy. She even won the Olympic silver medal in women's singles at the 2008 Summer Olympics at Beijing.

Being the younger sister of former Worls no. 1 men's player Marat Safin, they are the first brother and sister in tennis history to achieve No.1 rankings.

Profile and Biography of Dinara Safina 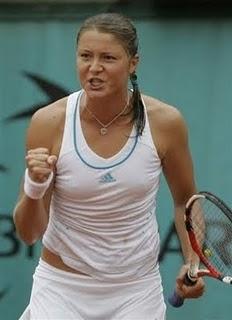 Dinara Safina started playing tennis at a very young age of 7 years. She loved the sport and kept on playing with inspiration from her mother who was her first trainer. She turned professional in the year 2002. Safina made her first debut in the main draw of a WTA tour tournament in May 2002 where she lost in the semifinals.

Dinara Safina first career title was won in Sopot, defeating two seeds including world number 24. In doing so she became the youngest Tour Champion in four years and the first qualifier to win a title in three years. She entered the Top 100 World Ranking because of this win. That year itself she made her debut in the Grand Slam reaching the second round and for the first time defeating a top 20 player, Silvia Elia who was World No. 14. She finished as world Number 68.

In the year 2003, she won her second title at Palermo though she lost in the first rounds of Australian Open, French Open and the Wimbledon but reached the fourth round of the US Open. She beat world No. 11 in Moscow and finished the season as world number 54. At the 2004 Australian Open, Safina made it only to the second round and could not make any impact in the other competetions. She finished the season for the first time ranking in the Top 50, as world Number 44.

Safina continued to climb rankings. When she defeated the World Number 5 in Paris, she was happy beyond imagination. That was till then the best win for her. She eventually won a match at the Wimbledon for the first time losing in the third round. In Moscow, Safina defeated the world Number 1 Maria Sharapova in the quarter finals, her first victory over a World Number 1. She also played a key role in Russia's victory against france in the fed cup.

Safina started 2006 by losing in the second round of the Australian Open. At the French Open safina made it to the quarter finals at the Grand Slam for the first time in her Career, though she lost in the third round of Wimbledon.
Safina won her first tournament in 2007 defeating Martina Hingis in the finals of Gold Coast. She also won the doubles title of the tournament. But then she lost in the third round of the Australian Open. She also lost in the fourth round of the US Open, though she made her comeback in the doubles and Dinara Safina first Grand Slam Title was won with Nathalie Dechy.

In the year 2008, Safina started off badly. Her best results in the singles were reaching only the quarter finals of Miami hough she won two doubles titles at the Gold Coast and Indian Wells. In May event in Berlin, Safina defeated World No.1 Justine Henin and then beating Serena Williams for the first time in the quarter finals.

Safina won her third Tier I title and overall fourth title at Tokyo. This win moved her to ranking as the World No. 3 before becoming World Number 2 briefly in October. She for the first time qualified the WTA Tour Championships and finished as World No. 3.

On 20th April, Safina became the 19th player and second Russian to be ranked as the World No. 1 by the WTA Tour. It was then that she for the third time that she again advanced to Grand Slam finals though she lost.

Safina then suffered some injuries which prevented her from playing well for some days. In 2010 she could not make any remarkable performance. She entered some matches as a wild card entry but failed to make a lasting impression.

In 2011, Dinara Safina received "double bagel" 6-0, 6-0 and became the first former World Number 1 player ever to receive this at a Grand Slam Tournament since the open era, thus losing her position to world Number 117 for the first time since 2002. Playing in the BNP Paribas open she restored her position to the Top 100.