Sorana Mihaela Cirstea who was born on the 7th of April, 1990, is a Romanian tennis player. Sorana Cirstea highest career rank had been world Number 23, which she achieved on the 17th of August, 2009, after she reached the quarterfinals of the 2009 French Open and the semifinals of the 2009 Los Angeles Open.

Profile and Biography of Sorana Cirstea 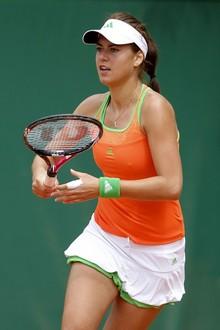 Cirstea was introduced to tennis at the age of four by her mother. Her parents supported her whole heartedly in the playing of Tennis. Steffi Graf and Roger Federar were her idols.

Cirstea became an ITF Junior circuit top-ten player, reaching her highest ranking of number six on June 26, 2006. Her best matches include a title in the 2005 German Junior Open. In April 2007, she reached the finals of the Budapest grand Prix tournament. She bet a number of good players while making her way to the finals who include Martina Muller. Thus reaching the finals, she became the first Romanian to reach a tour final since Ruxandra Dragomir in the year 2000. On her way to the finals she even bet two players who ranked inside the WTA top 40.

In 2008 in Tashkent, Sorana Cirstea first WTA tour title was won. She defeated Sabine Lisicki in the final. In 2009, Cirstea began the year ranked 36th, losing to Dinara Safina at the Medibank International. At the Australian Open, she lost in the first round itself; but reached the second round of the Doubles with her partner Monica Niculescu. As a singles player she even lost the 2009 Open GDF Suez and Barclays Dubai Tennis Championships.

After a few more loses, Cirstea's clay session began at the inaugural Andalucia tennis Experience in Marbella, Spain. She reached the semifinals defeating a number of players. In doubles, she paired with Ioana Olaru and reached the Quarterfinals.

Sorana had her Breakthrough in the 2009 French Open. She upset the 5th, 10th and 21st seed advancing to the third round of a Grand Slam ever. Cirstea again gave a brilliant performance in the LA Woman's Championships in August. Here she defeated the World number 4. Her brilliant performance earned her the No. 24th Position which changed to Number 23 in the Cincinnati Masters. It was then that she achieved the highest ranking of her Career.

A few more loses after that and Cirstea fell back to Number 45th with which she began the year 2010. Her career faced anumber of ups and downs after that. She couldn't make any significant achievement except upsetting World Number 2 in the 2010 AEGON Internatonal. At the Wimbledon Championship she was defeated by Petra Kvitova.

In the year 2011 Australian Open she won the first round to be defeated by Shahar Peer in the second. This again followed a number of loses and in the next few monthes she did not have any good results when she proved back in the 2011 Open GDF Suez in France where a number of top 100 players competed. She couldn't proceed more than the second round of the French Open and then again lost in the straight sets of the 2011 Wimbledon Championships.

Profile and Biography of Sania Mirza, the Indian Tennis Beauty

Sania Mirza is one of the highest ranking Indian tennis players. She is famous for her two hands back handed strokes and is a champion on all hard surfaces. To know more about Sania Mirza Tennis career, biography and profile check this Sania Mirza wiki article.