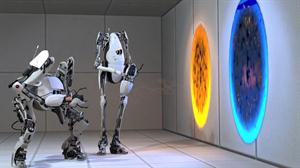 Portal 2 includes both single player and Co-operative modes. Portal 2 had won "Ultimate Game of the Year" in Golden Joystick Awards 2011. Portal 2 is one of the best puzzle games and player in the game has to solve the puzzles using Portal gun. Player will play as portal and one of the two robots named Atlas and P-body in Cooperative mode. The game comes with excellent graphics and stages. The main character of Portal 2 is Chell.

Portal 2 shows the technological improvement in videogames which is used perfectly in Portal 2. There are many downloadable contents for Portal 2. More details about the system requirements for Portal 2 in PC, game details, summary, ratings and reviews of Portal 2 are given below.