India won the series 5 - 0 against England

India had successfully won all the matches against England in the One day series against England. India takes the series 5 - 0 against England. Indian spinners showed an amazing performance throughout the series. India also got a new fast bowler named VR Aaron from this series. In the final match he had given an important breakthrough by taking the wicket of Alistair Cook who is going well in the game. Jadeja showed a brilliant performance in the last game by taking 4 important wickets and well supported by Ashwin and Tiwary. While coming to the batting of India, MS Dhoni who again showed his brilliance in the match by scoring more than 70 runs and also hitting some huge sixes in last few over's which made India to reach 271 runs. 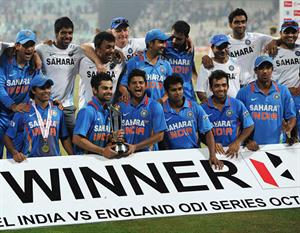 Most runs scored in India Vs England 2011 Series: virat Kholi with 270 runs

Most wickets taken in India Vs England 2011 Series: RA Jadeja

Man of the series in India Vs England 2011 Series: MS Dhoni

Man of the match in final game: RA Jadeja

Most centuries in the tournament: Virat Kohli with 1 century.

After the drubbing team India got in England they have come back strongly to beat England in the one day series 5-0.So many factors weighed against the Indian side when they toured England recently[1] lack of actual match practice[2]injuries to top
players[3] no exposure to wet weather conditions.[4]English players exploited their home conditions better[5]the team is a well knit young side that had just begun to perform as a unit.
Returning from a tour sans a victory India needs to be complemented for the 5-0 white wash they the English lions.They were not perturbed by the recent results but played positive cricket to reverse the fortunes.Youngsters like Raina, Kohli,vinay kumar, R jadeja,a RAHANE performed really well where as Manoj tiwari ,Varun aaron were the finds of the series.Good luck India keep it up.